Although relationship experts encourage us to love our partners the way they are, sometimes it’s very difficult to love an insecure man. You have to keep reassuring him that you only love and care for him and that you’re not seeing someone else. Otherwise, the relationship can end at any time.

If this is your predicament right now, here’s a guide on how to deal with an insecure man. 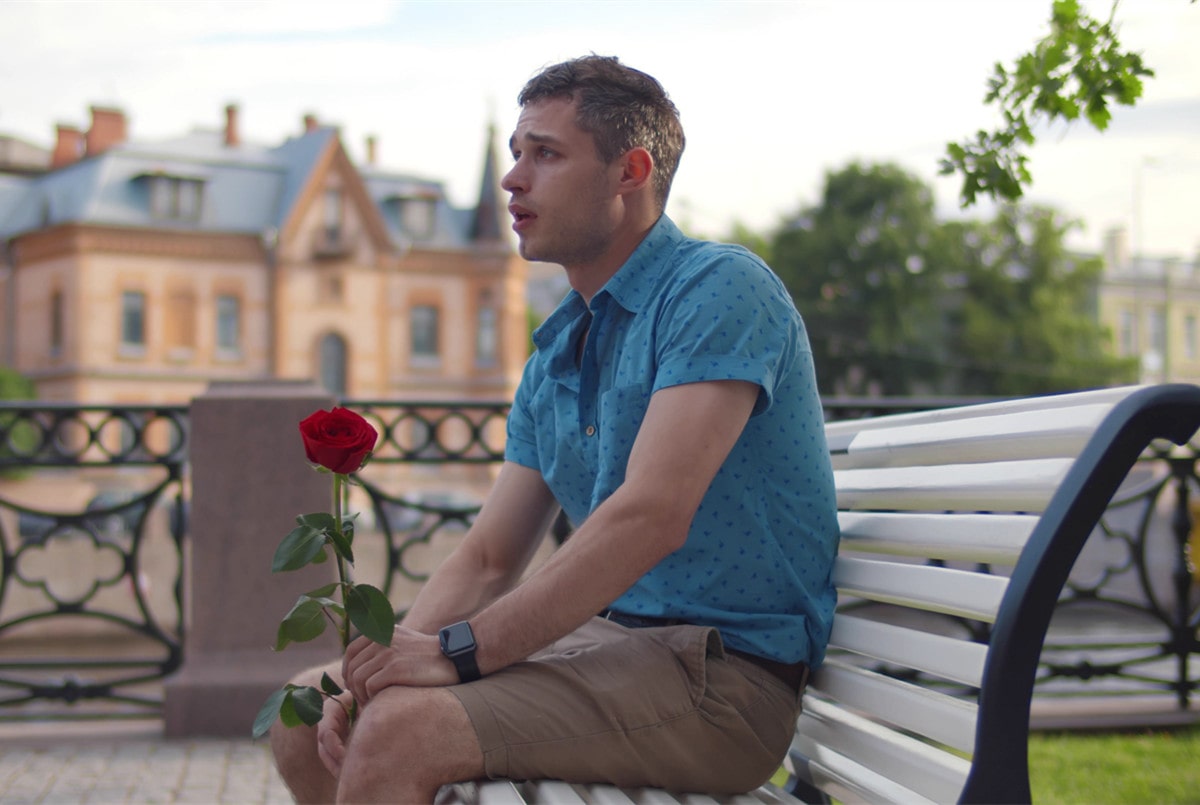 As a woman, dating an insecure man is one of the worst experiences you’ll ever have in your love life. It’s a toxic, unhealthy relationship that will be characterized by constant arguments and fights over small things, some of which are even unreal.

At first, his attentiveness and regular compliments will feel sweet and leave you thinking, “Maybe he’s the one”.

But soon his sweet attention will turn out to be an overwhelming obsession and an overbearing possessiveness. His compliments will no longer feel like genuine appreciation. This is when you’ll begin to realize that he’s insecure.

Unfortunately, his insecurity will suck all your energy as you work hard to reassure him that you only love him. It’ll get to a point where you’ll feel like it’s sucking the life out of you. An insecure man will constantly call or text you just to check your whereabouts.

Sometimes he’ll be following you secretly just to see where you’re going and who you’re talking to. At first, his constant need to know how your day is going may seem cute, but as the relationship progresses, you’ll realize that there’s a nefarious reason behind the incessant phone calls and texts.

Unfortunately, insecurity can affect even the most promising relationships. He might start out as the most loving and caring boyfriend or husband, but somewhere along the way, he becomes insecure to a point of overwhelming you with the need to be reassured.

Sometimes the insecurity may come from the deep and genuine love he has for you, but in other cases, he may have a lot of negative feelings.

13 Signs of an Insecure Man

No woman wants to fall in love with an insecure man. Many of them come to realize the mess they’re in when it’s rather too late.

Unfortunately, you’ll find insecure men everywhere, and at times you won’t know they’re the insecure type until you fall in love with them. Here are some telltale signs of an insecure man to help you make the right choice.

1. No Friends or Interests

If your man doesn’t hang out with anyone else but you and never mentions outside friends, he could be an insecure man.

Also, he could be insecure if he doesn’t show any interest or hobby outside of work. An insecure man hardly plays any sport, doesn’t go to the gym, doesn’t take any learning initiatives, doesn’t volunteer in anything, and doesn’t go to church.

This means that he doesn’t have anything else to do apart from going to work and spending time with you. The chances of him becoming obsessed with you are very high. Perhaps he had friends and interests at some point in his life, but he forfeited them all just to spend time with you.

2. He Doesn’t Want You to Be in Touch with Your Ex

If your man doesn’t want you to mention, let alone meet, your ex, he could be suffering from insecurity. He may be convinced that you haven’t gotten over your ex, even if you divorced or broke up with him many years ago.

No matter how hard you try to reassure him that you no longer have anything to do with your ex, your insecure husband or boyfriend won’t see reason.

He can’t believe that you truly love and care for him and that the only feelings you have for your ex are disappointment, disgust, hatred, pity, and loathing. The only logical conclusion he’ll make whenever the topic of your ex comes up is that you’re still in love with him.

3. He Confesses His Love for You Right Away

If he confesses his love for you right away before you even get to know each other well, you should treat it as a red flag, especially if he forces you to say you love him too. It may feel nice for him to profess his deep feelings for you as soon as you start dating, but the good feeling may be short-lived. You better be safe than sorry.

4. He Wants to Be with You Every Day

Does your man get upset when he’s unable to spend time with you every day? If so, he could be feeling insecure. Sometimes he’ll text you a few minutes after your date telling you how much he misses you. While this may leave you feeling desired, it’ll soon become overwhelming.

5. He Says You Are His Everything

It’s quite flattering to know that his world revolves around you and that you’re the only reason he’s alive. This will leave you feeling treasured, but being someone’s everything isn’t all that impressive, especially when they start controlling your life. Furthermore, it puts a lot of pressure on you because you have to live up to their expectations.

We all like to be loved and cared for. But if your man is always fishing for compliments by asking you obvious questions like, “do you love me?” or “I’m I attractive?”, he could be feeling insecure.

And when you reassure him that you find him attractive and you love him truly, he had a hard time believing you. This shows that he’s suffering from low self-esteem, which could be the driving force behind his insecurities.

7. He Accuses You of Being Unfaithful

If your man is insecure, he’ll always be suspicious of you. He will even accuse you of being unfaithful. For instance, when he sees you talking to the waiter at a restaurant or being friendly to your male coworker, he’ll conclude that you’re having an affair with him. 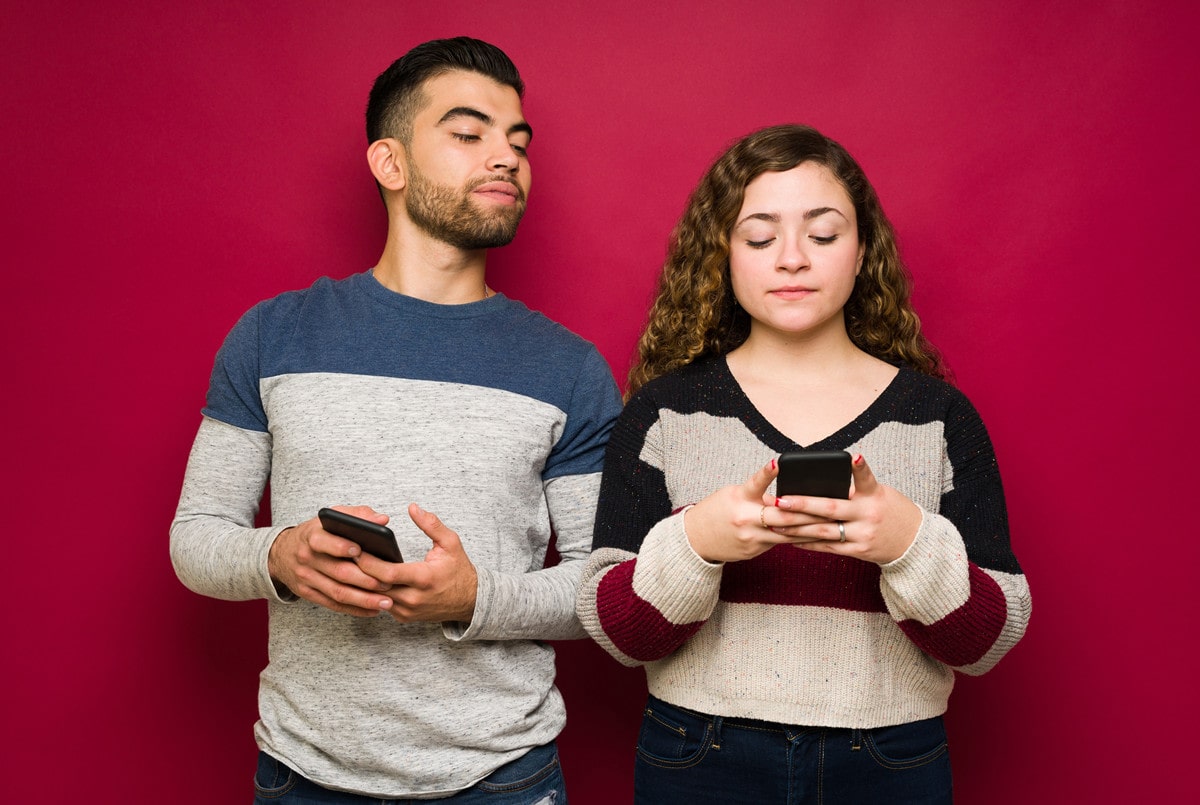 Any time you’re hanging out with friends in his absence, he’ll call you constantly to know who you’re with and what you’re doing. While this kind of possessiveness may feel great and special at first, it’ll soon become infuriating when he stops you from doing anything with friends.

9. He Keeps Threatening to Leave You

10. He Constantly Smothers You with Gifts

Every woman loves to be showered with special gifts and attention. This may feel sweet at first, but after a while, you’ll learn the real reason why he’s always bringing you gifts, which is to buy your love and ensure that you stay with him.

11. He’s Always Talking About His Ex

Although your man doesn’t want you to talk about your ex, he’ll bog you down with stories of how his ex-girlfriend cheated on him. He will always try to convince you that in every relationship that didn’t work out, he was the victim. He’ll do this hoping that you’ll sympathize with him.

Does it always feel like your boyfriend or husband is stalking you on social media? Is he always the first one to like or comment on your Facebook posts? Does he get upset when you post something on your wall without informing him? If so, he’s the insecure type.

An insecure man will always go through your stuff looking for signs of cheating. He will even look over your shoulder when you receive a text message on your phone. Sometimes he’ll blatantly ask you to show him the text.

How to Deal with an Insecure Man 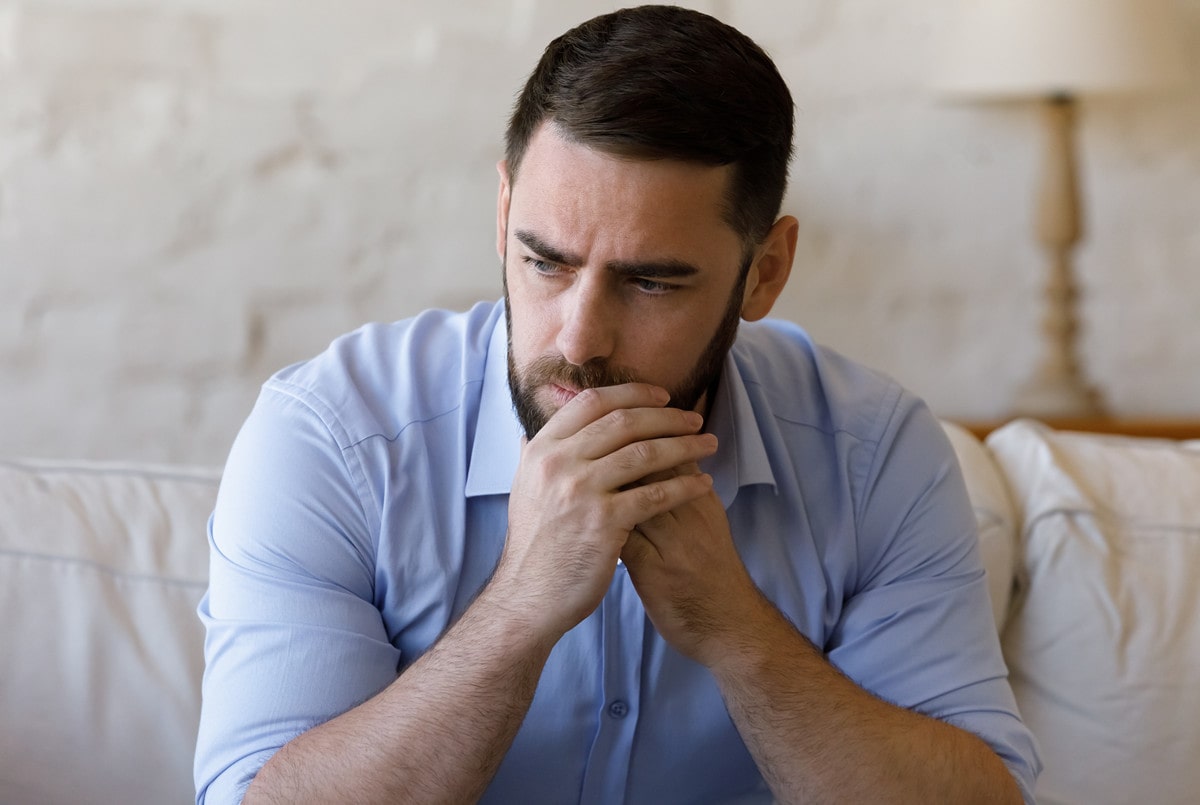 Staying in a relationship that seems to suck the life out of you is dangerous. Fortunately, there are several remedial steps that you can take to make life with your insecure man bearable. Here are some effective ways to deal with an insecure man.

1. Identifying the Source of the Problem

The only way to deal with a problem effectively is to identify its source. Once you understand why your husband/boyfriend is insecure, it’ll be very easy to deal with the problem. For instance, if he was cheated on or neglected by his previous partner, you can reassure him that you’re not going to leave him.

When you start noticing signs of insecurity in your man, it’s important to have a genuine chat with him and ask him what kind of support he needs from you. He may be going through challenges that leave him feeling insecure.

For example, he may be having difficulties accepting the idea that you are in love with him. In that case, you have to support him emotionally by reassuring him.

3. Spend Time with Him

For any relationship to thrive, both partners must be willing to spend some quality time with each other. This is particularly important if one partner is feeling insecure. By spending time with your man, you’ll make him feel comfortable and prove to him that his fears are baseless.

It’s important to establish boundaries with your man right from the start. Let him know that you need some alone time once in a while. Also, make it clear to him that you won’t be solving all his problems. So, take a step back and let him handle his own problems.

Sometimes a man with deep-seated insecurities will devise unhealthy ways of dealing with his feelings. In most instances, these tactics will manifest in the form of intimidation or manipulation. So, identify these tactics and deal with them immediately before they turn into something else more dangerous.